Had a good day at CoRSU today, and did quite a bit of teaching.  We started with the plastics ward round, and picked up a few patients there, as well as some from theatre later on. We needed to do 3 splints all the same design, for a burn contracture release, and 2 patients with joint fusions.  I did the first one whilst Isaac (the occupational therapist here) watched,  then he did the next 2 patients.  Isaac gets to do most of the hand therapy here, and seems very interested to learn. 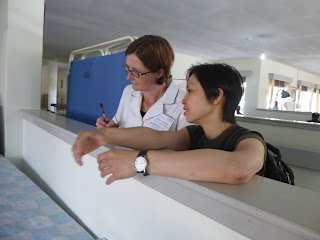 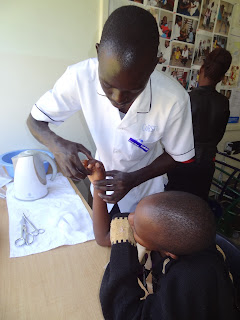 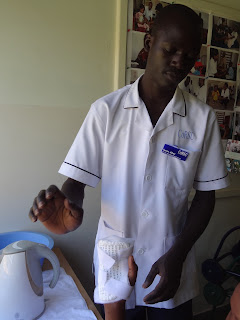 I helped with a few other patients that the physios were seeing.  The therapists here really are amazing, having to treat anything that comes their way.  One minute they are treating a newly referred 4 year old with cerebral palsy who has never had any previous treatment; the next patient may be someone with a bad back, then a baby with burns contractures, followed by a bit of plastering on a child waiting for leg splints so they can walk... and that was just this morning!  It is all so varied, and chronic / complex, as patients often cannot afford their treatment, or transport to the hospital, so hope it will just get better.  People are frightened of having an illness of accident, because the financial cost is so high.

After an exciting lunch of posho, beans and rice, I did a bit of teaching with the therapists.  The surgeons have done some tendon surgery this week, and I wanted to check that the therapists knew the post-op rehab for various conditions, as some of them will be seen next week. 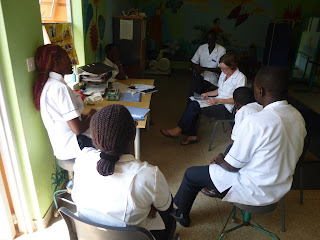 Christine helped me to make a difficult splint on a girl who had been shot by rebels in 1999.  She was shot in the hand, and had scar contractures which Andrew had released last week.  The contractures were so bad that he could not get the fingers to fully straighten.  We wanted to make sure that the scar would not contract again by holding the hand as straight as possible in the splint. 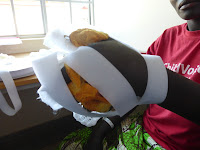 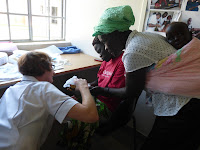 Woan-Yi did a lot of teaching with the trainees, Darius and Martin, in theatre.  They were repairing a 'spaghetti wrist' - where many tendons and nerves have been cut through - in this case, the woman had lacerated her wrist in a car accident 2 weeks previously.  It's a difficult operation - they needed to repair 9 tendons, 2 arteries, and 1 nerve. 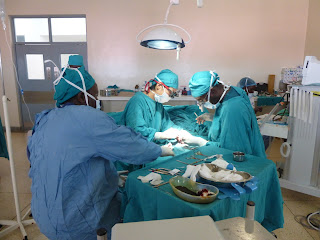 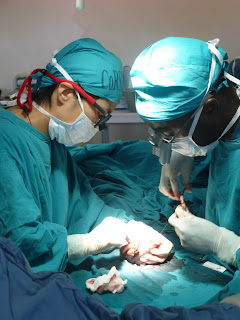 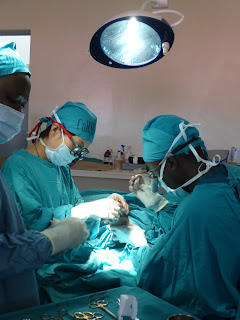 Vikram was also in theatre operating on children with congenital anomalies. 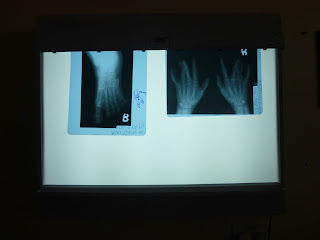 Bex was meeting various people including Mathias (the social worker) and Christine (physio) for interviews, and even managed to get me to appear in front of the camera!  She is making a short video for the website.

Karen talked to Mathias and did some investigating about the cost of treatments and equipment, and the intricacies of social worker assessment.

Sarah made us the most amazing curry for dinner - very brave, making curry for the discerning Vikram (originally from India)!

Later in the evening at around 10.30pm, we were sitting around the kitchen table, when a shuddering started - it was as if a train was going past very close.  It was an earthquake!  We were all very cool about it, not moving from our seats!  I thought that as Andrew and Sarah weren't panicking, that it must be OK.  There was another tremor in the middle of the night that woke me up - the curry was having an effect!

When we looked on the news later, it was an earthquake of 5.7 on the Richter scale, with the epicentre at Lake Albert 235km away, in NW Uganda!  We were experiencing the tremors.