A very exciting, though slightly nerve-racking day for me today.

It started in a lovely way, with Christine discharging home a lovely 16 year old boy who had never previously walked, having fixed flexion deformities of his knees.  He used to crawl around, but with help from Christine (gradually splinting his legs into a more extended position) and the people in the workshop at CoRSU, he is now able to walk with crutches.  How fulfilling Christine's job is!  His mother calls her a miracle worker - I agree.  He was wearing a brilliant t-shirt, saying 'Parents for sale. Buy one get one free'!  Made me laugh.

Then I was off to theatre to splint the little 22 month old boy with burns.  It didn't go quite to plan, and lots of improvisation was needed in theatre.  Luckily I had Stanley (another physio from CoRSU), who helped a lot, along with Alex Devaraj, helping to keep the child's head still while we were trying to get the material around the back of his head.  It's something I have never done before, and I think it turned out well.  Dr Andrew Hodges was happy with it. 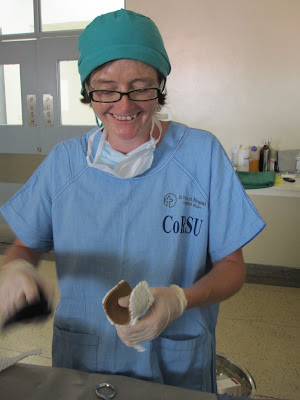 I felt very important as I was called to the other theatre to splint another little boy!!!  He had burn scar releases on his hand by Vikram, Woan-Yi and Martin. 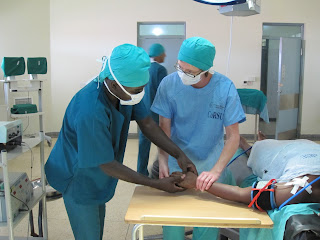 Lunch consisted of rice, peas and matoke - I'm going to try and write this in a different order each day I think.

Then it was back to help Stanley in the physio department.  I treated a little girl with a stiff elbow following an arm fracture.  Then I watched Stanley treat a 17 month old with cerebral palsy.  The physios here are amazing - there are only 5 of them, compared with about 70 at the RD&E, so they all have to know a lot about many different conditions.  They are extremely skilled, and take on anything that is thrown at them, however complex (which it very often is)!
Lastly we saw a 28 year old man with cerebral palsy who had fallen and broken his leg, which was in plaster.  We tried to get him to walk in the parallel bars, but he was having none of it!  I had to take a picture of the most ingenious bit of recycling I have ever seen!

... It's a plaster shoe made out of an old bicycle tyre - brilliant!!!!
Bex has been interviewing the 2 trainee surgeons today for the Interface Uganda video, about how the charity has helped them over the past few years.  They were really good sports for doing it, as they had been operating in theatre all day before Bex collared them at 5pm to be interviewed! 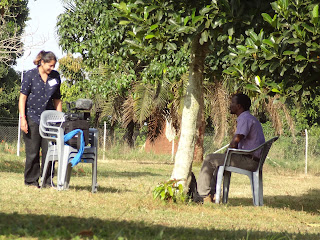 Vikram and Woan-Yi were involved in quite a dramatic case where a young boy had his arm amputated due to a tumour.

Karen spent some time in theatre and had fantastic time watching all the trainees in action.  She also got a chance to talk to some patients and relatives, finding out exactly how the charity has helped them and made a difference to their lives.